HOW AI CAN FIGHT GUN VIOLENCE IN AMERICAN SCHOOLS

HOW AI CAN FIGHT GUN VIOLENCE IN AMERICAN SCHOOLS

More schools are looking for ways to keep students safe from gun violence on campus, leading many districts to turn to technology for help. Companies like ZeroEyes, a Philadelphia-based security firm, are offering school districts a new way to monitor what’s going on in their classrooms, hallways and common areas: using artificial intelligence (AI).

AI isn’t a new technology, it’s the foundation behind many apps and voice-controlled devices; however, installing it in schools to protect students and staff from the threat of gun violence is new.

“Weapons are detected by software that works off of existing cameras,” Rob Huberty, chief operating officer at ZeroEyes, tells Parentology. He explains that the software they run is programmed to detect the types of guns typically used in mass shooter situations.

The weapon needs to be exposed (not hidden in a backpack or under clothing) for the AI to pick it up. If a gunman makes it into the building with a concealed weapon that external cameras don’t detect, interior cameras act as a second line of defense and identify the weapon as soon as it’s uncovered. From there, the system will send a series of alerts with photos and the location of where the weapon was spotted.

ZeroEyes is constantly scanning. According to Huberty, that means it’s searching for threats 24-hours a day, seven days a week.

“If a weapon is detected the school security officers (SROs), school administrators, and 911 dispatch are alerted,” he says. These alerts are sent out in real-time, which means the master control area doesn’t need to be monitored in order for the threat to be detected and the authorities to be alerted.

False alerts are rare, but also manageable, and can quickly be taken care of by a set of human eyes. Once an alert is sent out to the three parties, the photos are immediately reviewed. This makes dealing with false alarms a quick and easy process for administrators.

The technology behind ZeroEyes is different than some other technologies being deployed. Earlier this year a New York school district was the target of an American Civil Liberties Union (ACLU) investigation after they announced they’d be using facial recognition software. This type of software works by profiling individuals and assessing a threat level based on a number of variables, whereas software like ZeroEyes focuses on targeting weapons.

As the 2019-2020 school year starts, many districts are starting fresh with new technologies and security systems. ZeroEyes is just one of the many options on the market right now, but the industry continues to be a growing field thanks to the rising concern surrounding the threat of gun violence in American schools. 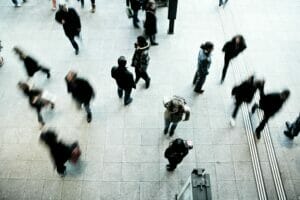