In government buildings, ensuring the security and safety of all personnel and visitors is a complicated task. Given the countless mass shootings that have occurred – and continue to happen – it’s clear that a proactive solution is needed to help keep everyone safe. Learn how ZeroEyes AI technology can turn your existing cameras into an enhanced layer of security.

of mass shootings since 2006 were carried out in a government building.
(The Associated Press/USA TODAY/Northeastern University Mass Killings database)

Our AI weapons platform is one component of your school community’s multi-tiered security approach.

Our software integrates with an organization’s existing camera systems and video analytics to detect weapons in real time.

If a threat moves throughout a facility, ZeroEyes will detect their weapon on each camera wherever they are within view, and an alert is generated each time a weapon is detected.

Our AI platform focuses on weapon detection, it does not record, store, or share video or images of customers, or any one else, ensuring that privacy is maintained.

Human intervention is critical with AI platforms, the military experience of our monitoring personnel is a key component of our solution. They monitor every detection 24/7/365, and once a threat is verified, can notify appropriate school security personnel and first responders.

As military veterans who have been involved in countless active shooter situations, that experience allows us to know exactly what a first responder needs when responding to a threat, and gives us credibility with law enforcement and security personnel.

down building as required
SEE A FREE DEMO

This incident was confirmed to be a terrorist attack. It was also the deadliest mass shooting on the world’s largest military base, home to about 700,000 troops, relatives, and support staff. The shooter was a U.S. army major and psychiatrist, and used a semi-automatic pistol to shoot unarmed military personnel.

Although government and military agents are tactically trained, there is no way to fully prepare personnel to react to an active shooter scenario. Many soldiers at Fort Hood bravely risked their lives to help the wounded in the 10 minutes until the arrival of the civilian police.


Our proprietary AI weapon detection system integrates with existing security cameras to quickly identify and confirm the number of shooters and guns.

Once the AI identifies a gun, an image is sent to the ZeroEyes 24/7/365 monitoring team to positively identify the threat, reducing the risk of false positives.

Then a camera image is sent via text alert to the designated security personnel for your building and to local emergency dispatch with the exact location of the shooter. The generation of the alert, monitoring, and dispatch occurs within 3-5 seconds, allowing for security protocol to be triggered and lives to be saved.

By seeing exactly where a shooter is in real time, security personnel can lock doors and move people to safety, while first responders have quality intelligence of the situation, rather than piecing together information from a patchwork of 9-1-1 calls. 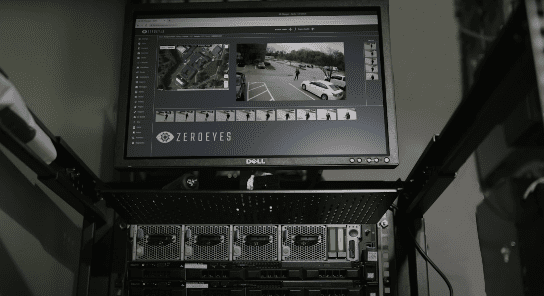